December 20, 2013 /TRUTH REVOLT/ Bradford Thomas – It was not a good night for Piers Morgan’s prepared talking points on Phil Robertson’s controversial statements about homosexuality. Two of his three panelists wouldn’t allow him any wiggle room on faulty premises and biblical misconceptions.

After combative CNN commentator Ben Ferguson called out both Morgan and the liberal guest, Marc Lamont Hill, on their false representation of Robertson’s comments on sexual sin (including homosexuality, bestiality, and heterosexual promiscuity), Morgan turned to Dr. Michael Brown, a biblical scholar with a PhD in Semitic languages, to try to put him on the spot. Not a great idea.

"Morgan: Let me ask you this, sir. As a Christian man, can you point to a single public utterance by Jesus Christ—the Christ in Christianity—about gay people or about a gay lifestyle? Can you name one single thing, derogatory or otherwise?

Ferguson: Go to Sodom and Gomorra for goodness sakes!

Brown: I’ll name three for your Piers. Number one, in Matthew 5, Jesus said he didn’t come to abolish the Torah but to fulfill. He takes the sexual morals of the Torah to a higher level. Number two, in Matthew 15, he says all sexual acts committed outside of marriage defile a human being. And in Matthew 19 he says marriage as God intended it is the union of one man and one woman for life.

Look, Jesus did not address wife-beating or heroin-shooting, but we don’t use that argument for silence. But in point of fact, he as a first century Jew, of course he reinforced these things. And Piers, I’d encourage you to restudy what scripture says. We should love our neighbors as our self, but that doesn’t mean we approve everything of our neighbor. "

At this point, Hill interjected, arguing that there are “several problems with that interpretation.

"Hill: One, the New Testament absolutely does offer the words and the voice of Jesus, and he very explicitly does not talk about being gay. And even the scripture you cited about marriage is very different than talking about being gay…"

Brown reminded Hill of Christ’s assertion that “marriage is one man and one woman,” but Hill moved on to attempt to address Brown’s statement about Christ’s reinforcement of Old Testament law.

Brown: Are you sure about that?

Hill: …The book of Leviticus, according to most biblical scholars, is not about being gay. If you’re talking about the story of Sodom and Gomorrahfor example. It’s really about being inhospitable to neighbors, it’s about prostitution, it’s about many other things…

Brown: Hebrew scholarship is my background, I have a PhD in Semitic languages… Leviticus 18 is quite explicit: For a man to lie with a man is contrary to what God intended. The rectum is part of the disposal system. It’s not meant for sexuality. God designed a man to be with a woman. That’s pretty obvious, not hateful to say it. That’s obvious. And, really, the Hebrew scriptures are clear on this, sir."

When Piers realized he was losing the argument, he shifted to Robertson’s supposedly racist statement about his own experiences working with African Americans before the Civil Rights movement. Ferguson and Brown weren’t particularly helpful to Piers on that point either. 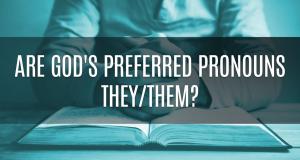